If you thought the potential to profit from buy-to-let investment was fading, it is time to think again. As demand for rental property increases, rents are rising, void periods are manageable, and rental affordability is increasing demand.

In this article, we look at the numbers that will have buy-to-let property investors salivating.

After a sluggish couple of years, not helped by idiotic property tax changes made by the UK government, returns on buy-to-let investment appear to have turned the corner. The latest Goodlord Rental Index, Knight Frank, and LonRes point to booming rents across most of England and Wales.

This matters to buy-to-let investors because it provides a good basis to work out your reserve fund. As you can read in the article “How big should your residential investment property reserve fund be?”, void periods are one of the three factors to consider when calculating how much money you should keep in reserve. When void periods are shorter, your contingency funding is smaller. This frees up money for other uses, such as further investment.

According to the Goodlord Rental Index for April 2019, average void periods across the eight England and Wales regions are:

3.75 – the average rental affordability in England and Wales

We hear a lot about housing affordability, but usually, associate it with the cost of a home. This number lets us see how affordable rental property is, by comparing average rent to average income. You may not be surprised to discover that the affordability of rental prices in England and Wales is lowest in the South of England and that the most unaffordable rents are in London.

Affordability of rent is defined as a tenant’s annual income divided by their annual rent. In other words, how many times a tenant’s income covers their rental amount. Here is how it measures up across England and Wales:

Greater affordability should allow tenants to more easily absorb rental increases. If affordability in the North West decreased to that of London, North West rental prices in the region would be 20% higher!

10.25 – the average length of tenancy in England and Wales

Tenancy length also matters to landlords. Ideally, you want great tenants to stay longer. This reduces the number of costly void periods. The shorter a tenancy and the longer a void period, the lower your return on investment.

Goodlord found that the average tenancy length is 10.25 months, but this ranges from eight months in the North West to 14 months in London:

Goodlord also found that rents increased in most regions between March 2019 and April 2019. The only declines were experienced in the North East and the South West. Average rents from the index are: 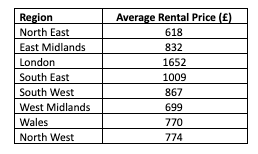 The rent you receive is a key element of buy-to-let investment. It determines your gross income, is imperative to cash flow, and, ideally, should cover your mortgage and other costs (although some investors purposely invest for negative cash flow).

Prime London rents are powering ahead

Activity and rental prices in prime London property are booming. Figures from Knight Frank and LonRes indicate that confidence has flooded back to the capital’s rental market. Knight Frank reports that the number of agreed tenancies and the number of prospective tenants registered in the first quarter of 2019 have spiked higher:

According to LonRes, rents in prime London increased by 2.6% in the first quarter of 2019 compared to the same period in 2018. It also said that rents on the prime fringe were 2% higher over the same period. Rents are being increased most on new lets. With the fall in property prices, yields across the three areas covered by LonRes have increased to 3.7%. This is the highest rental yield since the third quarter of 2013.

Almost half of the respondents to the LonRes agent survey said that they had less rental stock on their books than last year, while only one in five said they had more. Tenancy renewal rates are on the increase, too.

What does this all mean to the buy-to-let landlord?

Rents are rising in most regions, London is bouncing. Renting is still more affordable than buying a home, and tenants are becoming more inclined to stay put rather than move. In London, a shortage of rental stock is helping to power rental prices higher. Prime London property – the hardest hit by Brexit uncertainty – is in demand from tenants.

These are a tremendous set of figures, and evidence that buy-to-let investment retains its long-term potential for exceptional returns.

The current environment is conducive to rental price increases. To learn how we are achieving an average rent rise of around 6% for our landlord clients, contact Ezytrac today at  +44 0 1522 503 717.

About the Author: Brett Alegre-Wood

Brett has over 20 years experience in all facets of property, he owns various companies centred around property and is the driving force behind the education and training at Ezytrac. His companies have sold over £850 million in UK and London property and he manages over 1200 properties through his estate agency chain. Today he shares his time between UK, Australia and Singapore. He is married to Arlene and together they have 4 kids. Brett holds both the Level 3 Property Mark Qualifications for Property Sales and Property Lettings and Management.